The best business owners out are looking to create an office that improves productivity. The more comfortable your employees are in an office, the better work you’ll get from them. Ready to change up your office to give your employees the best working environment? Here’s why glass office partitions Manchester are just what you need.

Let That Light In 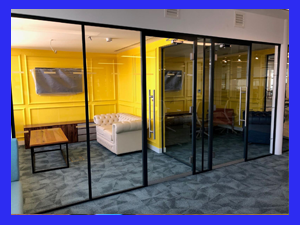 It’s amazing how important natural light is to an office. Of course, you can light the whole place with over head lights, but they’re not going to be the same as lots of windows letting light in over the working day. Plus, fluorescent lights aren’t amazing for the environment. They can even trigger headaches and migraines in some people, which you obviously don’t want to do. If you need to create some walled off spaces though, what can you do?

The answer is to use glass partitions instead of walls. You want to create that meeting space, or working pod. Whatever you need, you can have it thanks to the glass allowing the light in. It makes it so much easier to let the light in, and you won’t have to worry about blocking off windows. The office is just a better place to work in when there’s lots of natural light.

Dampen Sound But Not Visuals

Want to create some individual office spaces in your building? For example, you need a work space for managers who need to get on with some concentration heavy work for a while. They need somewhere they can work without interruption. In the past, you would create a walled office for them, which gives them the individual space that they need. However, you would also cut them off from the rest of the office that way. They can’t see the rest of the floor in their office, so it’s harder to keep track of what’s going on.

That’s why glass partitions are a popular way to create offices these days. You can create an office with a glass front wall, and that gives the occupant the chance to work in their own space, while still being able to see what’s going on around them. It makes it a lot easier to keep up with what’s going on, and they will find sound is dampened so they can get on with what they need to do. It’s something that gives them their best of both worlds.

Create Whatever Spaces You Need

There’s so much to consider when you’re creating a new office floor plan. You need every employee to be in the optimum place, but at the same time you don’t want to create more problems with the plan. As mentioned above, you can’t just place walls anywhere, as they’ll block light and can even be an eyesore in the office. What can you do?

The answer is in glass office partitions Manchester. As these are glass and have a thinner profile, you don’t have to worry about where you’re placing them as much. That means you can be more creative in your plans, and really give your staff what they need. For example, you can create ‘pods’ for your teams, so they can work together without being disturbed by the rest of the office. Individual work spaces are another popular way to use them, as well as creating reception spaces and even break rooms. Really think about what you need in your office, and use glass partitions to put those plans into action.

Your employees will need to deal with some disruption as they’re waiting for your office improvements to be done. That’s something you can’t get away from, but you can find ways to speed up those installation times. If you’re using glass partitions rather than full walls, you’re in luck.

Partitions are much quicker to install, so you won’t be waiting as long for that construction job to be done. Employees won’t have to put up with construction noise and mess as long either, so that makes their jobs a lot easier too. When it’s done, they’ll have a perfect new office space to work in.

Glass office partitions Manchester have so many benefits to offer you as a business. Want to change things up? Call us today for a quote.